In order to make it easier for users to use our website, we use cookies.By using our site, you consent to the storage of cookies on your computer/device. Nastavení cookies můžete změnit v nastavení vašeho prohlížeče.
Enable
Login New registration
0
0 pieces

The company that grew to become TSP in 1946, started out in Japan in the 1930’s as a company producing table tennis balls. Today, TSP, and its sister brand Victas, has its headquarters in Osaka, Japan and are led by legendary Japanese defender Koji Matsushita. TSP is famous for its wide range of pips-out rubbers, which include the Spectol, Spinpips, and Curl series. The original Spectol was developed in 1970 but continues to be used by top players including Han Ying (2016 Olympic silver medalist Women’s Teams) and Wu Yang (2009 World Junior Women’s Champion). Many new versions have been developed including the brand new Spectol Red and Blue rubbers, which have a built in speed glue effect. Similarly, the Super Spinpips come in many variations, including the Chop 2 version, which is used by Yuto Muramatsu (2014 Youth Olympic and 2014 Youth Junior World Vice-Champion Men’s Singles). The Curl P rubbers have been the weapon of choice for many long pip players over the years, including Joo Saehyuk (2003 World Men’s Singles Vice-champion), one of the most successful defenders of all time. TSP also offers high quality inverted rubbers such as the Ventus and brand new Regalis lines for modern offensive players. TSP has developed many innovative blade technologies, such as the balsa glass fiber system used in the Black Balsa, Balsa Glasfiber, and Balsa Fitter lines, in which elastic glass fiber layers are combined with vertical wood fibers to produce an extremely big sweet spot. Other top selling blades include the Reflex-50 and Swat series. 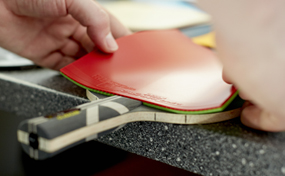